Fifty (50) Years since the Martial Law Declaration in the Philippines in 1972: Reflections (Part 2)

By the way, all over the country in the 1970s, student protest rallies abounded in all major cities of the Philippines. However, in 1970, while concentrating on our studies as freshmen, a strike by medical interns and training residents of the Philippine General Hospital, (PGH) broke out. The PGH is the university hospital where all students of UP health sciences undergo clinical training.

The organizers of the strike, mainly surgical residents, speaking against corruption in the hospital came to our class and rallied us to quit our classes and join the daily protest rallies in front of PGH. Well, while avoiding the street rallies, I did not realize that within the Manila Health Campus of the University, issues of neglect and corruption also were exposed to the public. So even in the seriousness of our studies, there was no escape to being a student activist as brought out by the circumstances of events in history.

By my second year in medicine, the major political event was the bombing of the political assembly of the opposition to Marcos Sr in Plaza Miranda, the major public square for protest in Metro Manila.

The date was August 21, 1971. President Marcos declared the suspension of the writ of habeas corpus (very much like the suspension of civil rights and thus taken by the public as a prelude to martial law). The bombing of Plaza Miranda killed and maimed many opposition politicians and therefore the public perception was that President Marcos even ordered the bombing of Plaza Miranda as part of his grand plan to declare authoritarian rule by martial law.

The Plaza Miranda political rally of August 21, 1971, was also the largest protest rally ever against the Marcos Administration. And this time the rally was not dominated by youth and students, but by all sectors of society. Aside from politicians, workers and farmers and office employees, and ordinary citizens all gathered to denounce the increasing corruption of the Marcos Administration as well as the preparation for the declaration of martial law and the one-man rule.

― Birth of the Progresibong Kilusang Medikal

Feeling confident as a second-year medical student, I got recruited into student politics to join the elections as a University Councilor. Before this decision to join student politics, there was also ferment at UP College of Medicine. Many medical students and a few faculty members were also discontented with what is happening in Philippine society and also what has been happening inside the Philippine General Hospital.

Medical students were also asking about the relevance of the content and pedagogy of the medical curriculum, and whether this was responsive to the call of society to serve the people. Most of the graduates of the UP College of Medicine ended up practicing in the United States instead of staying or returning to the Philippines.

So a new medical organization was born – the Progresibong Kilusang Medikal (PKM) or the Progressive Medical Movement. Indeed I was a founding member of PKM and eventually, PKM joined the student political party, Sandigan Makabansa (SM) or Patriotic Alliance.

Yes, I eventually won as a University Councilor in 1971 and that was a year of mixing medical studies with student politics leading to running in 1972 as the Chair of the UP Student Council. 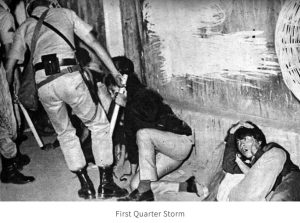 Fifty (50) Years since the Martial Law Declaration in the Philippines in 1972: Reflections (Part 1)

The Search for a Good Shepherd